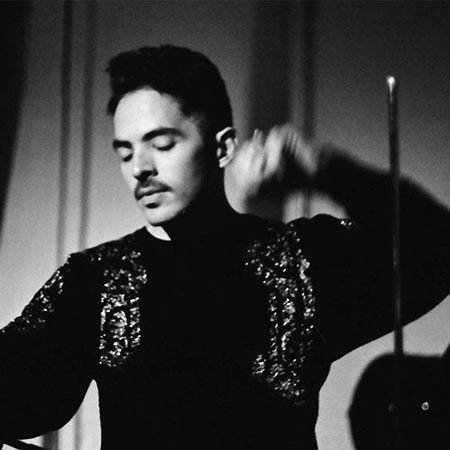 Nahum is the Founding Director of KOSMICA, a global institute founded in 2011 with the mission to establish a

Nahum’s ouvre goes deep into human experience by contrasting our perceptions through unlikely perspectives. Navigating between the real and the imaginary his work produces events that reframe the way we understand the world. He often employs outer space technologies, illusionism, hypnosis and music to guide audiences into unsettling journeys to raise critical dialogues about the politics of existence. Nahum’s multidisciplinary work orchestrates a wide range of media that includes performance, installation, video, music, drawing and storytelling.

Nahum has worked on various space missions for artistic purposes with the major space agencies including NASA, ESA, Roscosmos and SpaceX. He is the first artist to launch an interactive artwork into outer space in 2018. Nahum has served as the Chair for the Committee for the Cultural Utilisation of Space (ITACCUS), at the International Astronautical Federation (IAF) in Paris. In 2014, he was the first artist to be awarded the title of Young Space Leader for his unique cultural contributions to astronautics and space exploration. He is the Founding Director of KOSMICA, a global institute founded in 2011 with the mission to establish a platform for critical, cultural and poetic discourse on our relationship with outer space, space exploration and the impact of these activities here on Earth. The Institute develops initiatives that bridge art and humanities, the space sector and wider society.

As a keynote speaker he has toured in various countries around the world presenting topics about creativity, innovation, interdisciplinary collaborations and diversity. Nahum has developed a series of unique performance-talks where he introduces ideas while performing on stage. He often presents his work alongside Nobel Laureates and international leaders in the fields of technology, science and culture. Nahum’s work has been widely exhibited in all continents including countries like USA, Canada, Mexico, Argentina, Germany, UK, France, Sweden, Russia, Australia, Taiwan, China, Japan, Brazil amongst others.